This is my review of the Legion Pulse Pre-Workout supplement that I’ve used as part of my pre-workout regimen for the last two years. In that time they have changed the formulation, for the better in my opinion.

I’m going to be completely upfront and say that I wasn’t a fan of the taste of the old version of Pulse. I usually go for the Fruit Punch flavor and it wasn’t exactly my favorite thing to drink.

I don’t know what they did, but the new version is actually really tasty and I look forward to it before workouts.

Any pre-workout supplement worth anything will improve your energy and endurance levels, help boost strength as well as reduce fatigue. Oh, and not make you nauseous in the process.

Old Version of Legion Pulse on left, new version on the right.

Well, with Pulse’s new formulation they added a powerhouse ingredient in AlphaSize® Alpha-GPC, which is expensive, but Legion was able to maintain the same price as before.

Will Legion’s Pulse Pre-Workout Drink help you achieve your goals in the gym? I think it will, it’s helped me and I think it can help you too. Let’s take a look at why Pulse is a very effective pre-workout supplement. 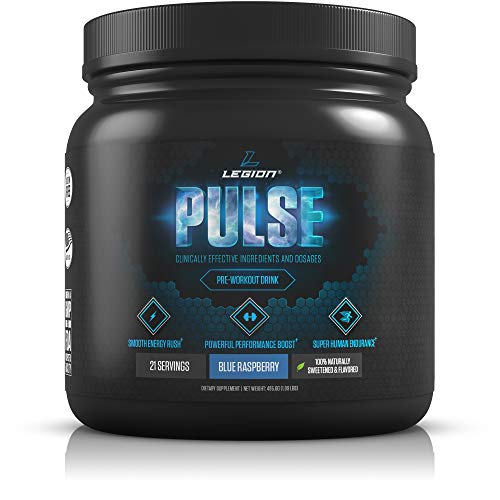 Here are some of the things that I like about the Pulse Pre-Workout Drink as well as some things I wish were better. 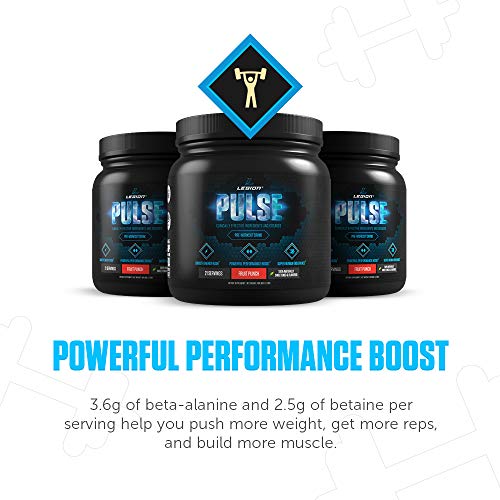 I am going to discuss all of the ingredients in Legion’s Pulse Pre-Workout Supplement and how they are beneficial in helping you achieve your fitness goals. I’ll try not to get too sciencey. 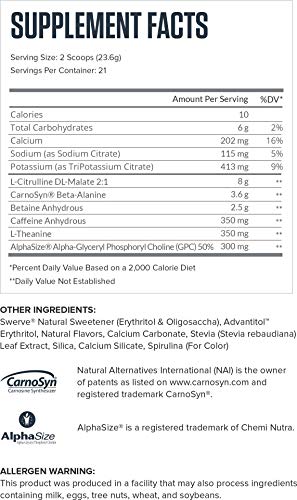 Let’s start with the new kid on the block, the ingredient they added in the new formula of Pulse, AlphaSize® Alpha-GPC.

Alpha-GPC is basically a form of choline that has a high degree of bioavailability when ingested. Bioavailability meaning the degree of which a supplement is readily put to work in your bloodstream.

Choline (the C part) is a nutrient that helps brain function. When coupled with glycerophosphate (the PC part) it increases your nerves’ ability to communicate with each other.

The AlphaSize® Alpha-GPC form of Alpha-GPC is made by Chemi-Nutra, the U.S. branch of its parent company Chemi S.p.A. a leading nutraceutical company based in Milan, Italy. They have been around since 1973 are known for their impeccable quality and standards.

I keep including the trademark with this form of Alpha-GPC because it is the purest form on the market and not a synthetic version.

There are a lot of synthetic imitations on the market today with tons of impurities and non-bioavailable components. This is a fancy way of saying these synthetic versions of Alpha-GPC are garbage and not as effective as AlphaSize® Alpha-GPC.

Another thing, this ingredient is not cheap. More on that in the new formula versus old formula section.

Caffeine is effectively taken before a workout in that it enhances strength and promotes muscle endurance. Taken in a dosage that’s effective, usually between 3 and 6 milligrams, it’s easy to see why it’s included in Pulse.

There is also a non-caffeine version as well.

L-Theanine is great in Pulse in that it takes the edge off of the jitteriness that the caffeine might give you. It also increases nitric oxide, which improves blood flow.

This is the amino acid L-citrulline combined with malic acid. L-citrulline has shown to improve athletic performance after ingesting it in certain dosages.

The reason that Pulse contains citrulline malate and not L-citrulline is that citrulline malate is the form that is used most in studies. These studies convey its benefits for our purpose in taking it, to enhance exercise performance.

When you ingest more beta-alanine, it will raise your carnosine levels in your muscles, allowing you to work out longer.

Betaine is an amino acid found in foods such as beets, quinoa, and spinach.

One of Betaine’s benefits is that it helps balance fluid levels inside and outside your body’s cells. This is important in that fluid imbalances can lead to cell death, we don’t want cell death. No, we don’t.

These are included to basically help with your electrolyte levels. If your workout is intense, you will lose water and your body will need help balancing its water and pH (or acidity) levels.

Old version of Legion Pulse, with Taurine, Ornithine and a higher dosage of Beta-alanine.

A few years after releasing the original version of Pulse, Mike and his team began to notice a ton of imitators appearing on the market.

These imitators took many forms. Some had the same ingredients but at very untransparent levels. Something had to be done for Pulse to remain the cutting-edge, top-quality pre-workout supplement it was before the snake-oil salesmen showed up.

The solution? Include AlphaSize® Alpha-GPC. This is the purest form of Alpha-GPC you can get. As mentioned earlier, there are many synthetic versions that just aren’t as effective because they include impurities such as synthetic chemicals.

But the addition of this ingredient to the new formula comes at a cost. It’s not cheap. This put Mike and his team at a crossroads.

They had to decide what could be cut from the old formula to include this ingredient and still be better at the same time. Oh, and not put them into Chapter 11.

Out With the Old, In With the New

They decided to remove Taurine. The reason being that your body can only absorb so many nutrients at one time. Since Taurine has the ability to be taken at any time during the day and still show benefits, later on, this was a reasonable exclusion.

Another thing they did was to reduce the amount of beta-alanine from 4.8 to 3.6 grams per serving. Recent research has concluded that you can get all the benefits of beta-alanine at a daily dosage of 3.6 grams. So 4.8 grams is overkill.

Another ingredient they removed was ornithine. Ornithine increases endurance by removing excess ammonia from your bloodstream. However, as it turns out, this actually isn’t a problem with most people that are working out anyway. This ingredient was deemed superfluous as well and got the ax. 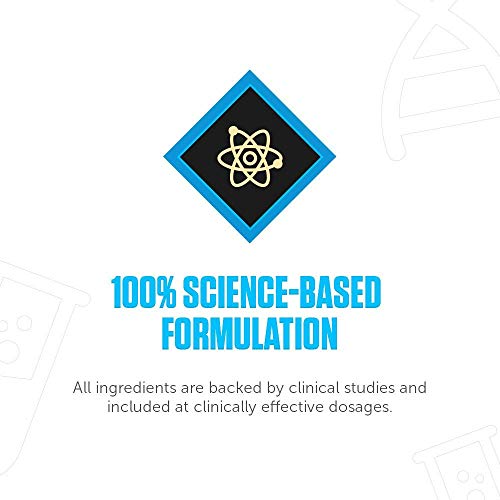 Taste and Blendability of the New Pulse Formula

The taste of the new formula is far superior to the old one. I would mostly attribute this to Taurine missing from this version. It seems like most things with Taurine seem to have a bitter, acidic taste.

So, I’m happy that’s gone. I really dig the Fruit Punch flavor. It mixes well in water no problems.

You can use an immersion blender, fork or whisk, they all work well, no problem.

When you take into account the high dosages per serving of Pulse’s ingredients you really only need to take one scoop. The serving size says two scoops but unless you are really dragging on a certain day, one scoop will be plenty enough to get your pump on.

When that’s taken into account Pulse falls into the middle-upper price range of post-workout supplements. But as you can see by the list of quality ingredients there’s a good reason for this.

Pulse is well-worth the money.

Oh, and the new great taste coupled with Legion’s 100% money-back guarantee if you’re not satisfied makes this one a no-brainer.

Now, go lift something heavy already! Thanks for reading.